Back when I started this blog, last August, I came to it with a bevy of ideas and inspiration, with some grand plans, and with a commitment to update weekly, regularly, to better build an audience and an expectation of regular content. For awhile, I maintained that plan, and I worked toward a long series of posts on Closed Systems Economics—some of it already in mind and some of it still forming in the ether. I planned, as well, to delve into serialized fiction on this blog and other subjects as they caught my fancy.

As readers can see, these plans have withered and morphed into alternate plans. The election proved distracting and a busy holiday season that included a major life milestone initially knocked the regular schedule of the blog off track. An increase to full time in my day job starting at the beginning of the year kept me struggling to update the blog. It’s not that I don’t still have ideas for posts that I would like to communicate, but that I’m feeling less and less that this is the most important use of my time.

I’ll be honest: There’s a good chunk of me that simply wants time to read (I’ve returned full bore to it in recent months) and to spend time relaxing with and talking with and enjoying the amazing woman in my life. In addition to my currently full time job, I have another issue of Into the Ruins that I want to get out into the world (and which I’m behind on putting together) and my own personal fiction writing I want to pursue. I have books calling to me and a partner, as well—not to mention friends, family, and all the people in my life I sometimes struggle to find time for. For many years now, I have made it a habit to take on more than I can do, and I’ve done it as someone who—aside from his many ambitions—intensely loves and in many ways needs a good bit of down time. Frankly, I also love to walk, preferably at least an hour each day, and it’s hard to do that and write a blog post at the same time.

Finally, in thinking on this today while out for just such a walk, the thought finally knocked me upside the head that I want more tangible things in my life right now. I spend too much time on the computer creating digital ether as it is, given my day job. Even though it will still involve a computer, I would rather craft my writing a bit more slowly, a bit more privately, and then release it into the world (hopefully) more fully formed and in hard copy. Thanks to my works publishing Into the Ruins, I know now how to do that, if only I get the actual writing done. I would rather focus on that goal than trying to meet a weekly deadline.

Therefore, I am stepping away from Litterfall. I know, it didn’t last that long, and I made the unfortunate mistake of publicizing it in the third issue of Into the Ruins right before I stopped updating it. (Whoops!) And hey, I’m not saying I’ll never update here again; I imagine there will be some moments when inspiration will strike and I’ll simply want to put something out into the world. But that’s more like to be once every could months than once a week.

For those of you who have followed my writing from back in the Of the Hands days—well, this is likely to come as no surprise. Apologies; I suppose I’m nothing if not predictable. For everyone else, I’m sorry for not better following through. I have a nasty habit of taking on more than I can realistically accomplish and fooling myself about that fact. It’s something I continue to work on. And for those of you who have followed my story, “An Expected Chill,” I hope it isn’t too much a jerk of a move to say that I now plan to finish that story not here on the blog, but in the pages of the fourth or fifth issue of Into the Ruins. I’ll be sure to make an announcement here when its available.

Thanks for the readership, everyone, and for all the comments. If you have something to say, please do so in the comments below, as well. I promise to answer, unlike some of the last few posts when I’ve let that habit slide. And I’ll almost certainly be back at some point. It’s just that those returns will probably be few and far between. With luck, whenever I do come back, it’ll be worth a visit from you. If you want to see it when it happens, you can always sign up to follow the blog by email to your right.

All comments from new users are reviewed before posting, so please be patient. Please refrain from use of profanity, avoid ad hominem attacks, and be courteous and respectful. If you don't follow these rules, your comment will be deleted. Thank you! Cancel reply

Get the newest issue of Into the Ruins! 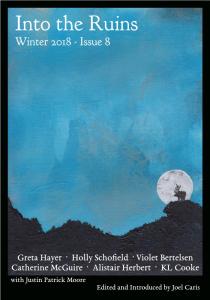 Recent Posts: Into the Ruins

A Turn Toward the Outer

“Exodus”: A Trip to Mars

The Face of the Deep

A New Place in the World